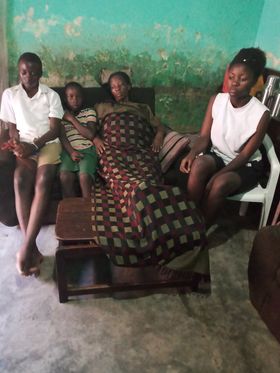 Diego’s Mom, Doricus, described the horrific scene: “We decided to run away from Congo after seeing so many people killed and their houses burnt. While running with other groups of refugees, the other four children got lost from us. I and my husband managed to remain with these three because they were still young. He carried Benjamin on his back and held Diego`s hand while I held Victor`s hand. We couldn't stop to look for them because there were gun shots everywhere. I really don’t know whether my children are still alive or dead. But the information I have is that all our relatives including my siblings and parents were killed others were burnt in their houses into ashes.”

The family found housing in Namungona, but in 2017 Diego’s father died, leaving Doricus with full responsibility for the family. But Doricus suffers from diabetes and spinal injuries, and is unable to work or to buy medicines she needs. The donated funds are paying for medicines for Doricus, school fees for Diego and food including rice, beans, flour and oil.

James Nsamba, Director of the Children’s Art Center, says Diego is one of the most artistically talented kids he has ever encountered. He’s been appointed as an assistant teacher and says he loves helping other kids with their artwork. He hopes to make a career as an artist. Diego says, “I love art with all my life and all my feelings. I can’t live without art because when I’m painting or drawing I feel ok. I started coming to Namungona Childrens Art Center in 2015 and I began to learn painting, drawing and so many other skills. Uncle Jim (James Nsamba) is the one who teaches me everything that I know about art and I thank him for everything he does for me. I want to become known to the whole world as an artist and I want to teach art.”

Read the full interview with Diego and his family by Emily Kembabazi here.